On April 11, 2016, the American National Standards Institute (ANSI) held a China Roundtable meeting in Beijing to discuss the draft revised China Standardization Law, which was recently released for public comment. ANSI members, including Oracle, Underwriters Laboratories, Rockwell, Intel, Emerson, Motorola, and Cisco, as well as representatives from the U.S. Information Technology Office (USITO) and the U.S. Embassy in Beijing, attended.

During the meeting, ANSI's chief representative in China, Xu Fang, provided an update on ANSI's China program and facilitated discussion on the reform of China's standardization system, including the draft revised China Standardization Law. Participants shared their feedback and concerns with various provisions of the draft law. Mr. Fang emphasized the opportunity to submit comments to the Chinese State Council by April 21. ANSI's comments are available here.

ANSI is closely monitoring the rollout of the reform of China's standardization system and the implementation of the six measures contained in the reform plan (see related article). Following the release of the draft China Standardization Law, ANSI hosted a high-level Chinese delegation from SAC on April 25, 2016, to further discuss the provisions of the new draft law and to give ANSI members an opportunity to provide guidance and feedback (see news item link on ANSI- SAC Event on China's Standardization Reform).

ANSI's China Roundtable serves as a forum for ANSI members and partners located in China to discuss relevant issues (for more information on the China roundtable visit the StandardsPortal). In addition to hosting meetings to discuss challenges and strategize on pertinent issues, the roundtable hosts an annual ANSI in China Appreciation Reception. The most recent reception was held in Beijing in September 2015 and marked the conclusion of a very productive year for ANSI's China program. The event gave ANSI members and partner organizations in China the opportunity to network among the unique group of key players with the U.S-China standards space (see related article).

For more information on ANSI's China program, visit the StandardsPortal. Please email china@ansi.org with any questions. 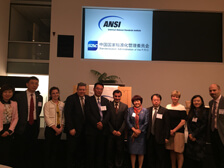