Susan B. Blaeser, standards manager of the Acoustical Society of America (ASA), will retire on May 27, 2016, after 15 years with the company. In recognition of her outstanding service and dedicated management of its standards program, ASA recently announced that it will award Ms. Blaeser with a Distinguished Service Citation at its 171st meeting of the ASA on May 25, 2016, in Salt Lake City, Utah.

ASA, an ANSI member and accredited standards developer, is a nonprofit organization that develops and publishes standards on acoustics, mechanical shock, noise and other associated subjects. It serves acoustics professionals throughout the U.S. and abroad in a variety of fields related to sound including physics, engineering, robotics, oceanography, architecture, music, noise control, among others.

In addition to managing ASA's standards program, Ms. Blaeser is a member of the ASA Committee on Standards (ASACOS) and has served as the associate editor for standards of the ASA Journal since 2001. She also leads the ASA standards Secretariat, which administers the ANSI-accredited U.S. Technical Advisory Groups (TAG) to nine Technical Committees (TC) and Subcommittees (SC) of the International Standards Organization (ISO), and the International Electrotechnical Commission (IEC). This includes ISO committees on acoustics, noise, underwater acoustics, mechanical vibration, shock, and condition monitoring and the IEC committee on electroacoustics. Previously, Ms. Blaeser was the managing director at Island Harvest, a hunger relief organization, from 1997-2000.

"While the standards program is small in terms of our staff size, ASA's work in standardization has a far encompassing reach," Ms. Blaeser told ANSI. "I have been delighted to work with many wonderful people who have supported me and I only wish I had started my career at ASA sooner." Ms. Blaeser plans to spend retirement with her husband, three grandchildren, and filled with many travels. 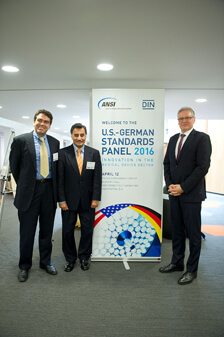