A proposed American Bar Association (ABA) Resolution encourages Congress to amend the Administrative Procedure Act to require agencies to make standards that have been incorporated by reference (IBR) accessible, without charge, to members of the public - at minimum: online, read-only access to the incorporated portion of the standard. The Resolution further requests that agencies review their historical incorporations by reference, and make such arrangements for these standards as well, or amend or repeal the regulation to eliminate the incorporation by reference.

"This significant change could not only jeopardize the U.S. standardization system, but may also put some standards developing organizations out of business," said S. Joe Bhatia, president and CEO of the American National Standards Institute (ANSI), in a recent message to ANSI members.

Mr. Bhatia encouraged members to review the proposed ABA Resolution, read ANSI's comments on it, and share their views with ABA members, including in particular ABA State Delegates, who may be sensitive to the viewpoints of the standardization community.

The Resolution will be up for vote before the ABA House of Delegates in August 2016.

Other recent significant decisions on IBR - including the December 2011 Administrative Conference of the United States (ACUS) recommendation; the November 2014 Office of the Federal Register (OFR) final rule; and the January 2016 Office of Management and Budget (OMB) revision to Circular A-119 - have all provided opportunity for public comments. No such open, public comment structure is available for the ABA Resolution.

"It strikes me as ironic that those who advocate so strongly for the public's right to information are now trying to force a significant decision through a closed forum," said Mr. Bhatia. "It's incumbent upon all of us to reach out to ABA members, help educate the ABA House of Delegates, and change hearts and minds."

For more information and history on the IBR issue, visit www.ansi.org/ibr. 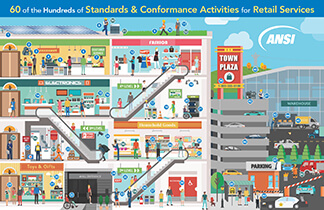