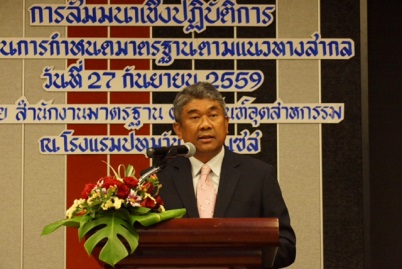 ANSI presentations focused on an overview of the Institute, accreditation of standards developing organizations (SDOs), U.S. Technical Advisory Groups (TAGs) to the International Organization for Standardization (ISO), and the Standards Alliance program. The TISI expert team provided a one-hour presentation on the TISI standards development process, and hosted a tour of a sustainable organic dairy farm - one example of the Thai "sufficiency economy" theory, which describes an economy characterized by sustainability, moderation, and broad-based development.

TISI announced that it is considering revamping its current standards system and noted its interest to get the private sector more engaged in the Thai standardization process. Mr. Thompson and Ms. Roop had the opportunity to meet Tawat Polquamdee, TISI secretary-general (right), who retired in September 2016. Mr. Pisit Rangsaritwutikul is the new TISI secretary-general, (effective October 1, 2016). Prior to this position, Mr. Pisit was TISI deputy secretary-general and inspectors general, Ministry of Industry.

ANSI and TISI signed a memorandum of understanding (MOU) in 2007 and aim to continue their collaboration in the future.

The Thai Industrial Standards Institute (TISI) was established in the Ministry of Industry as the national standards body of Thailand on January 1, 1969. On March 25, 1979, TISI was upgraded to a departmental status under the Ministry of Industry. The scope of TISI also covers the Office of the National Codex Alimentarius Committee. TISI's mission is a focal point for standardization for internationally recognized in response to meet the needs of government, businesses, and society, and to strengthen capabilities for sustainable competitiveness.