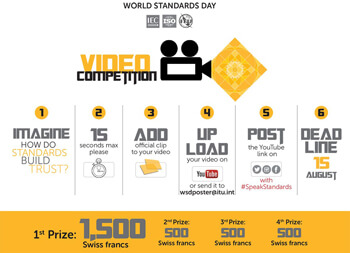 Choose a Winner for the World Standards Day Video Competition!

The World Standards Cooperation (WSC) has selected 13 finalists for its annual World Standards Day video competition, and to support this effort the American National Standards Institute (ANSI) encourages all stakeholders to vote for a winner. The video competition, co-organized by the International Electrotechnical Commission (IEC), International Organization for Standardization (ISO), and the International Telecommunication Union (ITU), is intended to raise awareness about the importance of standards in daily life. This year's contest theme called for applicants to get creative with a 15 second video highlighting the theme: "Standards Build Trust."

The annual video contest commemorates World Standards Day (WSD), which launched in 1970 and takes place on October 14. WSD is a means of paying tribute to the collaborative efforts of the thousands of experts worldwide who develop the voluntary technical agreements that are published as international standards. The video competition winner will receive cash prize of 1,500 Swiss francs, and the three runners-up will receive 500 Swiss francs.

To view the finalist videos, visit the official YouTube page, and vote for the winner via Survey Monkey. Join the social media conversation using #speakstandards.

The 2016 U.S. Celebration of World Standards Day will take place on October 27, and will include a reception and gala dinner at the Fairmont Washington in Washington, D.C. The event will include the presentation of the 2016 Ronald H. Brown Standards Leadership Award, which is named after the late U.S. Secretary of Commerce and honors an individual who has effectively promoted standardization as a key tool in the elimination of global trade barriers. The 2016 World Standards Day Paper Competition winners will also be announced by the president of SES - The Society for Standards Professionals.

ASTM International will serve as the event's 2016 administrating organization, while ANSI and the National Institute of Standards and Technology (NIST) serve as event co-chairs. The annual event celebrates the collaborative efforts of the thousands of public and private-sector experts that dedicate their time and expertise to the development of international standards. 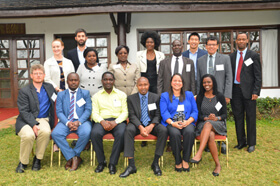