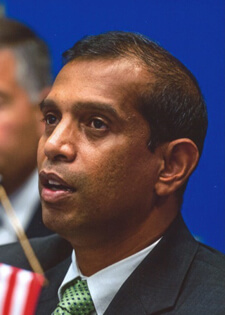 Ajit Jillavenkatesa, Ph.D., of the U.S. Department of Commerce's National Institute of Standards and Technology (NIST) has been approved as chair of the American National Standards Institute (ANSI)-accredited U.S. Technical Advisory Group (TAG) to the International Organization for Standardization (ISO) Technical Committee (TC) 229, Nanotechnologies. Dr. Jillavenkatesa replaces Steven Brown, formerly of Intel Global Environmental Health and Safety, who has served as chair since 2011.

"Nanotechnology" refers to the manipulation and control of matter in the nanoscale (approximately 1 to 100 nm), which is utilized in a number of industry sectors from information technology to medicine to clean energy production. With an increase of nanotechnology-enabled products entering the marketplace and shifting requirements of lawmakers, regulators, and scientists, work in the standardization of nanomaterials and nanotechnology applications continues to progress.

Administered by ANSI, the U.S. TAG to ISO TC 229 is responsible for formulating all U.S. positions and proposals with regard to ISO standardization in the field of nanotechnology. ISO TC 229 has five working groups (WGs), focused on the development of international standards in the areas of terminology and nomenclature (WG 1); measurement and characterization (WG 2); health, safety, and environment (WG 3); materials specifications (WG 4); and products and applications (WG 5).

A materials scientist by training and co-chair of the ANSI-Nanotechnology Standards Panel, Dr. Jillavenkatesa provides standards policy and related expertise and advice to leadership and staff at NIST, the Department of Commerce (DoC), other U.S. government agencies, and the private sector. In 1997 he joined NIST as a post-doctoral fellow, and now serves as the Institute's senior standards policy adviser with the standards coordination and program coordination offices and as a member of the DoC's digital economy office. He specializes in standards and technology related policy issues in South Asia, Asia-Pacific and Europe, with a particular focus on China, Japan, and India; and in emerging technologies such as nanotechnology and information and communication technologies/digital economy technologies.

An active participant in international standards development activities, Dr. Jillavenkatesa contributes standards, technology, and related policy expertise to intra- and inter-governmental groups, bridging the worlds of standards, technology, competitiveness, international trade, and regulatory policy. He has been involved with the TC 229 U.S. TAG for over a decade, and has been an active participant in WG 1 and a contributor to WGs 3 and 4, as well. His chairmanship was formally approved at the September 21, 2016, meeting of the U.S. TAG to ISO TC 229.

Dr. Jillavenkatesa also participates in the ISO TC 229 Task Group on Consumer and societal dimensions, and has provided standards policy expertise to the House Committee on Science and Technology during a short-term assignment to the Committee in 2010. He was a resource to Committee staff during the development and reauthorization of the America COMPETES Act, signed into law as the America COMPETES Reauthorization Act of 2010 (P.L.111-358). Additionally, he has authored and co-authored books and peer-reviewed publications related to physical and chemical characterization of materials. He received ANSI's Next Generation Award in 2008, the DoC's Silver Medal in 2013, and its Bronze Medals in 2009 and 2011.

In accordance with the ISO TC 229 TAG Operating Procedures, ANSI is responsible for appointing the chair from the individual members of the U.S. TAG, subject to approval by a majority vote on the U.S. TAG. Dr. Jillavenkatesa's chairmanship was formally approved at the September 21, 2016 meeting of the U.S. TAG to ISO TC 229.

"The U.S. has been an active participant and effective leader within ISO TC 229 since the formation of the committee in 2005, playing a key role in influencing the strategic and technical direction of the committee's standardization initiatives," said Fran Schrotter, senior vice president and chief operating officer at ANSI. "As TAG Chair, Dr. Jillavenkatesa not only brings to the table his professional and technical expertise, but also strong diplomatic skills, which promise to help the U.S. achieve consensus on positions that will be beneficial to industry and government. We look forward to continuing to work with him in this new leadership role."

ANSI serves as the U.S. member body to ISO. To read more about the ISO TC 229 efforts and program of work, please click here.