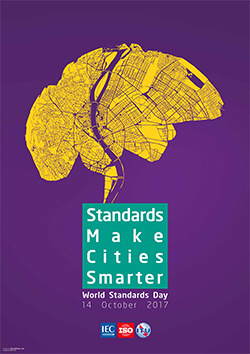 The contest required contestants to submit an inspirational and creative illustration that shows how international standards contribute to making cities smarter. For his winning poster, Mr. Rahimian, an art director and advertising consultant, created "a combination of interwoven lines in [a] brain as a recognizable symbol of intelligence, and a dense city map."

For those with a creative edge who missed out on the poster contest, the World Standards Cooperation is still seeking submissions for its World Standards Day Video Competition. Read ANSI's recent news coverage to find out more about the competition.

ANSI Announces Recipients of the 2017 Leadership and Service Awards