The UASSC's mission will be to coordinate and accelerate the development of the standards and conformity assessment programs needed to facilitate the safe, mass integration of unmanned aircraft systems (UAS) - commonly known as drones - into the national airspace system (NAS) of the United States. The collaborative will also focus on international coordination and adaptability, with the goal of fostering the growth of the UAS market. The group will not develop standards; rather, it will work to develop a standardization roadmap over the course of a year to identify existing standards and standards in development, define where gaps exist, and recommend additional work that is needed.

UASSC's roadmap will include a proposed timeline for completion of the work and list organizations that can perform the work. The aim is to describe the current standards landscape, articulate standardization needs, drive coordinated standards activity, minimize duplication of effort, and inform resource allocation for standards participation. ANSI announced the establishment of the UASSC in May 2017 following a meeting with UAS stakeholders.

The UASSC meeting will be held from 9:00 a.m. - 4:30 p.m. EDT on September 28 at the National Housing Center, 1201 15th Street, NW, Washington, DC, followed by a networking reception at the same location. Participation is open to UAS stakeholders that have operations in the United States. There is no fee to participate but advance registration is required. The draft agenda is available on the UASSC website along with a working draft of a standards landscape document listing known published and in-development UAS standards, other deliverables, and initiatives. Meeting participants should familiarize themselves with the standards landscape document in advance of the meeting in preparation for breakout discussions.

"ANSI looks forward to bringing together members of the public and private sectors for a discussion of standardization needs to support this exciting area of technology. The Institute has a successful track record serving as a neutral facilitator to convene such collaboratives when there is a demonstrated need for coordination. That is the case with UAS where many standards developing organizations are involved, as our discussion earlier this year demonstrated," said ANSI president and CEO S. Joe Bhatia.

The American National Standards Institute (ANSI) is a private non-profit organization whose mission is
to enhance U.S. global competitiveness and the American quality of life by promoting, facilitating, and safeguarding the integrity of the voluntary standardization and conformity assessment system. Its membership is comprised of businesses, professional societies and trade associations, standards developers, government agencies, and consumer and labor organizations. The Institute represents the diverse interests of more than 125,000 companies and organizations and 3.5 million professionals worldwide. 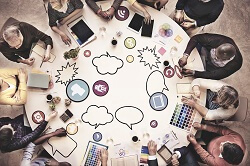 Less than a Month Away: Certificate Issuers' Accreditation Workshop