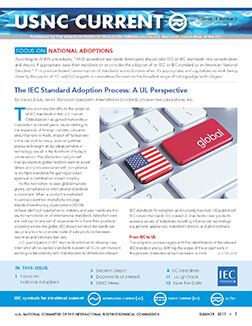 The U.S. National Committee (USNC) of the International Electrotechnical Commission (IEC) today has published the Summer 2017 issue of its quarterly newsletter, the USNC Current. The issue focuses on the national adoption of IEC and International Organization for Standardization (ISO) standards as American National Standards (ANS).

The summer edition features an editorial from a UL senior standards specialist about the process and numerous benefits related to the adoption of IEC standards in the U.S. market, and an article that details the procedures that govern the national adoption process. The American National Standards Institute (ANSI) is the official U.S. representative to ISO, and, via the U.S. National Committee, IEC, and is a U.S. representative to the International Accreditation Forum (IAF).

This month, the USNC recognizes professional achievements, including the participants of the 2017 IEC Young Professionals Workshop, and the eight USNC experts honored with the 2017 ANSI Leadership and Service Awards. The USNC also recently welcomed two new program administrators to its USNC team in New York.

Other highlights include coverage on an international guideline on vessel shore reporting that can improve navigation safety, and details about the IEC System Committee Active Assisted Living (SyC AAL) - formed to support independent living of the aging global population as well as others of any age group that require support due to illness or disability.

The issue's Decision Depot column provides links to recent decisions that have been made regarding IEC and USNC policies and procedures that directly affect its members. 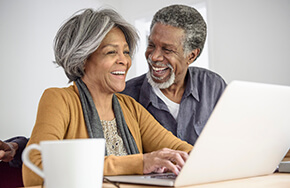