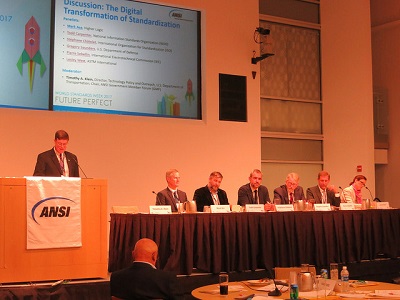 During the opening Tech Trends 2017 session, Scott Buchholz, federal chief technology officer, Deloitte Consulting, provided an overview of the Deloitte Tech Trends 2017 report, which highlights the trends that have the potential to disrupt businesses in the next 18 to 24 months, including IT unbounded, dark analytics, machine intelligence, and mixed reality.

Mr. Buchholz noted that standardization professionals must create standards to keep up with the pace of technologyfaster than ever before. He highlighted the significance of inevitable architecture, which involves modernizing infrastructure and platforms through containerization, standards, and autonomics. He also highlighted blockchain, which is emerging as a mainstay for digital identities in the emerging trust economyand the protocol for digital asset management, identities, and smart contracts.

He added that blockchain makes it harder to "undo" actions when it comes to tracking, and cited how businesses are piloting blockchain in supply chain management, in addition to financial organizations that rely on the technology for value transfer. Virtual currencies on blockchain technology can save companies money, but he also warned that virtual currencies can be difficult to control and follow, and individuals need to own their own information and not allow it to be mediated by organizations that they don't necessarily know or trust, asking the standardization audience, "How can we get there?"

Panelists at the Virtual Reality (VR) and Machine Intelligence segment explored tech applications for business and leisure, in addition to machine intelligence applications.

Ms. Lancaster explained that CTA created a standards effort associated with small unmanned aerial systems (sUAS) based on discussions with federal agencies and stakeholders, publishing its first sUAS standard earlier this yearless than one year from the creation of the project. CTA also has Working Groups (WGs) focused on augmented/virtual reality (AR/VR) and other WGs focused on health, fitness, and wellness tech.

Mr. Ludden of IBM gave an enlightening presentation on incentivized learning and progress on narrowing artificial intelligence (AI). He noted several current trends involving AI in VR, including interactive speech interfaces, visual recognition, data analysis/manipulation, spatial programming, and more. He noted opportunities for future trends, such as how AI in VR will enable productivity, therapy, education, recovery, and training, for example. He also pointed to what he believes will be a game changer for the AI industry: DeepMind's AlphaGo Zerothe first computer program to defeat a world champion at the ancient Chinese game of Gohas surpassed human level of play through the system's technique of reinforced learning. Through programs such as this, he explained, AI's potential is greater than ever before.

Finally, Mr. Newman talked about the IEEE Global Initiative for Ethical Considerations in Artificial Intelligence and Autonomous Systems (launched in 2016), which operates on an ethically aligned design, with input from leaders in academia, science, government, and the corporate sectors. He noted that IEEE's initiative was developed to show that aligning technology with ethical values can help advance innovation with new tools, while diminishing fear in the process. He encouraged all stakeholders interested in working cooperatively on these issues at the institutional level to get involved.

The Digital Transformation of Standardization

Panelists during the interactive afternoon session explored three facets of the digital transformation of standardization: 1) creating new tools and methods to develop standardsincluding ways to get broader participation in standardization work as well as new types of standards deliverables; (2) exploring different publication formats like XML that are more flexible and robust; and (3) integrating standards directly into products, systems, and services. The panel provided an overview of the current landscape and discussed whether stakeholders need to disrupt standards content as disruptive technologies continue to accelerate.

Mr. Ace, from Higher Logic, which works in cloud-based community platforms, emphasized that there is a gap between what users want to do and limitations in technology, noting that working online should be easier than it is today. AI, he emphasized, will have a lot more influence as in the future, and human and machine collaboration will become more common. "Standards are the digital ingredients to that end result," he said.

Mr. Carpenter offered a historical perspective to standardization community, noting that standards have really been around for centuriesstarting with page numbers and the alphabet. He emphasized the need for standards that support digital native documents, adding that standards development is important to support interoperability, a linkable and trackable document, and multimedia.

Mr. Carpenter also noted that the adoption of NISO's STS: Standards Tag Suitewhich provides a common XML format that standards developers, publishers, and distributors can use to publish and exchange full-text content and metadata of standards in an open and trustworthy processoffers benefits to standards developers.

Mr. Chatelet gave the audience a question to think about: Is it the digital world that drives innovation or vice versa? Work is in progress at ISO in regards to project management to improve ISO's performance in delivering high quality standards, and Mr. Chatelet noted that as standardization communities such as ISO work geographically with diverse groups, the community needs to find ways for IT to support and transform business. He encouraged stakeholders to be agile in order to rapidly benefit from new solutions. But he emphasized that the industry's digital evolution is not only about IT, it also relies heavily on culture and processes.

The DoD's Mr. Saunders gave a snapshot on industry 4.0 and the development of "smart" standards to support smart products. He emphasized that there is a major contrast between how fast everything related to IT is moving compared to the rate of standardization development. He noted that the DoD is rethinking documents as data, and modernizing ASSISTDoD's repository of specs and standards in PDF formatto meet the challenges of this century. The DoD is also relying upon the Semantic Web for Interoperable Specs and Standards (SWISS), which reduces engineering lead time to manage standards and their derivatives such as test plans, purchases descriptions, and work instructions. It is based on an open, interoperable format that integrates with the enterprise software for consumers and suppliers, and links DoD data directly to industry authorities including standards developers.

Mr. Sebellin reported that IEC, as part of its digital transformation, just released a machine-to-machine (M2M) interface for its terminology (Opendata.iec.ch). He explained that the new IEC Business Platform will bring integration of data and services as well as a new standards development approach for new areas of work. He explained that IEC is currently converting its catalogue to XML, which is compatible with the NISO exchange format. He also noted that IEC has three types of systems groupsStandardization Evaluation Groups, Systems Committees, and a Systems Resource Groupthat promote open cooperation across all relevant organizations to address converging and transversal technologies.

Finally, Ms. West discussed leading factors driving ASTM International's direction, including enabling technologies such as NISO's STS and increasing interoperability, partnerships, and improved discoverability. She noted how ASTM members have shifted from books, paper, and PDFs to homemade networks and online subscriptions, for example, and how this has affected ASTM's evolution of workflow and tools. And she provided an overview of ASTM's Compassa portal for standards e-learning, which includes a digital library.

The day-long event also included ANSI's Annual Business Meeting luncheon, during which Board of Directors chair Kevan Lawlor and president and CEO Joe Bhatia provided an overview of the Institute's major accomplishments over the past year. And ANSI distributed its 2016-2017 Annual Report, entitled Standards and Conformance: Shaping Our Future.

For more information on the JMF sessions, see the presentations online, and visit ANSI's Flickr album to access event photos. 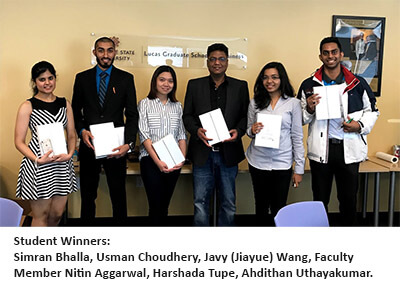 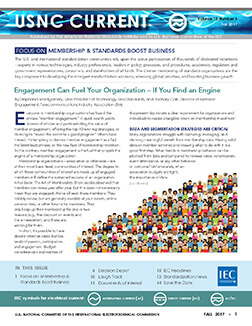