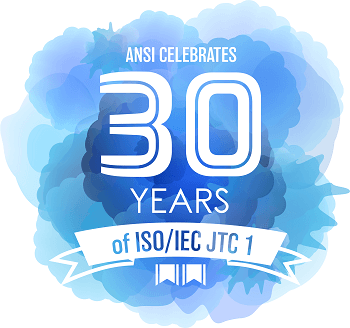 Happy Birthday! The International Organization for Standardization/International Electrotechnical Commission's (ISO/IEC) Joint Technical Committee (JTC) 1, Information Technology, is celebrating 30 years of remarkable standardization achievements in information and communication technology (ICT). As the committee's secretariat, the American National Standards Institute (ANSI) this year commemorates the work of JTC 1 and its subcommittees by highlighting three decades of committee milestones that support a multitude of different industries and applications operating on a global scale, from smart cities and cloud computing to cybersecurity and programming languages.

This Fall, ISO/IEC JTC 1 marked its three decade milestone in Vladivostok, Russia, during its 32nd annual plenary meeting. The event coincided with the 81st IEC General Meeting, which was hosted by the Russian National Committee and united more than 80 experts from 18 countries to discuss work in progress and emerging areas in information technology.

As a result of the plenary, JTC 1 is set to establish a new SC on the topic of Artificial Intelligence (AI)a prominent theme at the meeting which will consider aspects of AI including but not exclusive to: Terminology, Reference Architecture, Security, Fuzzy Logic, Machine Learning, and Risk Mitigation.

The meeting revealed leadership changes, as the JTC 1 Plenary has endorsed Mr. Phil Wennblom (U.S.) of Intel as the incoming JTC 1 Chair for an initial three year term. Mr. Wennblom was selected for his in-depth experience in information technology standardization. For the last 4 years he has served as Chair of INCITS (the U.S. Technical Advisory Group that mirrors the work of JTC 1) and the U.S. Head of Delegation to JTC 1 Plenary meetings.

ICT and the Scope of Standards Work through the Years

In the 1960s, as transistor production for computers took off, ISO Technical Committee (TC) 97, Information Technology, along with International Electrotechnical Commission (IEC) TCs 47B and 83 were leading efforts in IT standardization work. Notable among the early publications were:

As computers became a necessary tool for organizations, government, and consumers, international standardization work ramped up to keep pace with industry demand and technological innovations.

In 1987, ISO/IEC JTC 1 was formed by the merger of ISO/TC 97 and IEC TCs 47B and 83. ISO/IEC JTC 1 was created to accelerate progress and wide deployment and avoid the development of duplicative or possibly incompatible standards by each organization.

Within 15 years of its official launch, ISO/IEC JTC 1 created a roster of successful ICT standards that encompassed the fields of multimedia (MPEG and JPEG), security, programming languages, and character sets. By the 2000s, the committee's work had expanded to even more areas, including security and authentication, bandwidth/connection management, software and systems engineering, storage and data management, portable computing devices, and societal aspects (such as data protection and cultural and linguistic adaptability).

As one of the largest and most prolific technical committees in the international standardization community, ISO/IEC JTC 1 has had direct responsibility for the development of over 3,000 published ISO standards, with almost 600 currently under development. Its work in standardization also encompasses 21 subcommittees that make a tremendous impact on the global ICT industry.

The U.S. plays a leading role in JTC 1, with ANSI, the U.S. member body to ISO, serving as secretariat. The committee has made tremendous progress under the guidance of Karen Higginbottom, director of standards initiatives for HP Inc., who recently completed her third successful term as the committee's chair. ANSI's Lisa Rajchel serves as secretary.

Progress in ICT standardization can also be attributed to 33 national bodies that work alongside ISO/IEC JTC 1. Another 63 countries serve as observers, and over 4,500 experts from around the world work in collaboration to develop the most effective and relevant ICT standards.

The ICT industry has seen tremendous change in recent years and has become pervasive on a global scale. Digital technologies have transformed the lives of nearly everyone on the planet, and ICT has been applied to all major sectors of the global economy. The pace of change in ICT has led to rapid transformation of whole industries. As more of the world's population depends on ICT, interest in ICT standardization has grown among governments, industry, consumers, and society overall.

Such an approach has enabled ISO/IEC JTC 1 to make great progress in developing standards that cross a broad swath of technology sectors, particularly in rapidly expanding areas such as cloud computing, cybersecurity, sustainability, and internet of things (IoT). ISO/IEC JTC 1 is currently addressing such critical areas as teleconferences and e-meetings, cloud data management interface, biometrics in identity management, sensor networks for smart grid systems, corporate governance of IT implementation, big data, and wearables. As technologies continue to converge, ISO/IEC JTC 1 has positioned itself as a system integrator, especially in areas of standardization where many consortia and fora are active.

More of the innovative developments from JTC 1 include:

-Smart Cities: JTC 1 WG 11 on Smart Cities was established in October 2015. This group serves as the focus of and proponent for JTC 1's Smart Cities standardization program and develops foundational standards for the use of ICT in Smart Cities - including the Smart City ICT Reference Framework and an Upper Level Ontology for Smart Cities - for guiding Smart Cities efforts throughout JTC 1 upon which other standards can be developed, among other advancements.

-Cybersecurity: The established market position of ISO/IEC 27001 and ISO/IEC 27002 IT Security Techniques, as best-selling ISO/IEC standards in information security management and as a common international language, provides many opportunities for growth and outreach into all market sectors, especially to address the diverse and continual increase in cyber risks.

-Cloud Computing (19086 series - Service Level Agreements (SLAs)): The final report of the JTC 1 Study Group on Cloud Computing (SGCC) by JTC 1/SC 38 on Distributed application platforms and services, identifies the future work of JTC 1/SC 38 in the area of cloud computing, and provides a basis for JTC 1/SC 38 working with other relevant JTC1 sub committees and with groups in other standards developing organizations.

A fundamental and essential part of the JTC 1 standardization process is the JTC 1 Publically Available Specification (PAS) process. Initiated more than 20 years ago, the process allows JTC 1 approved consortia organizations to send specifications directly to JTC 1 for national body voting to become International Standards. Currently 13 organizations are recognized PAS submitters, and this collaborative process has led to more than 200 submitted PAS being approved as ISO/IEC standards.


There is no doubt that the ICT industry will continue its meteoric growth. ISO/IEC JTC 1 is committed to keeping pace, and has identified a large number of focus areas for future work, including but not limited to:

The ongoing challenges and opportunities surrounding ICT technology ensure that ISO/IEC JTC 1 will have many more years of prolific activity.