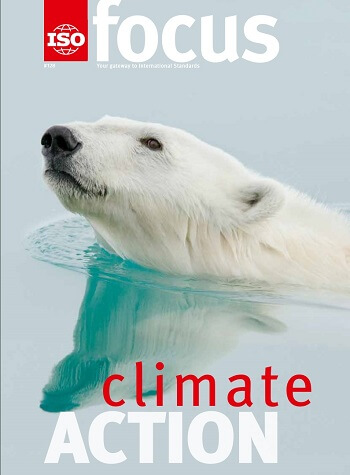 The May/June 2018 edition of the International Organization for Standardization's ISOfocus magazine on climate action recognizes the American National Standards Institute (ANSI)'s 100 year anniversary, and pays tribute to ANSI's support of the critical voluntary standards work that has fostered significant U.S. advancements and milestones. ANSI is the U.S. member body to ISO.

The issue's key highlights include the range of standards for monitoring climate change, quantifying greenhouse gas (GHG) emissions, and promoting good practice in environmental management and design. It also highlights how standards are making a difference.

The issue also recognizes ANSI's 100th anniversary, and its impact on American progress, from post-war industrial production to modern technology. Get more details on ANSI's centenary on its anniversary tribute page, www.ansi.org/100, and follow ANSI anniversary news on Twitter with hashtag #ANSIturns100.