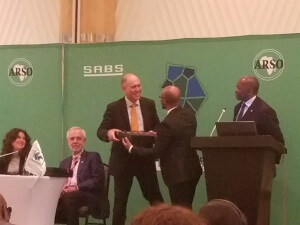 The American National Standards Institute (ANSI), through its public-private partnership with the U.S. Agency for International Development (USAID) called the Standards Alliance, participated in the June 18-22, 2018, African Organization for Standardization (ARSO) General Assembly, which was hosted by the South African Bureau of Standards (SABS) in Durban, South Africa. ARSO is an intergovernmental organization established by the African Union with a mission to facilitate intra-African and global trade by providing harmonized standards and facilitating their implementation.

Building on ANSI's cooperative Memorandum of Understanding (MOU) with ARSO, ANSI helped arrange three presentations by U.S. experts during African Day of Standardization at the 2018 ARSO General Assembly. U.S. speakers shared their perspectives on the importance of standards in international development and as a mechanism to augment regional trade. U.S. speakers included representatives from ASTM International, Underwriters Laboratories (UL), and the U.S. Foreign Commercial Service (FCS), who presented alongside representatives from the International Organization for Standardization (ISO), the United Nations Development Programme (UNDP), and Physikalisch-Technicsche Bundesanstalt (PTB).

The General Assembly provided an opportunity for ANSI to meet with various MOU partners and build on existing relationships. Notably, the deputy general of the Association Senegalese de Normalisation (ASN) provided a presentation lauding ANSI-ASN cooperation through a twinning arrangement for the secretariat of ISO Project Committee (PC) 305, which is in the process of finalizing a standard on sustainable non-sewered sanitation systems.[Read the related article, "For World Toilet Day, ANSI Highlights ISO PC 305 Efforts on Non-Sewered Sanitation Systems."]

The 2018 event was ARSO's 24th annual General Assembly. The meeting included five days of programming focused on the Strategies for ARSO Sustainability within the Strategic Plan 2017 - 2022 as well as topics revolving around the role of quality infrastructure and standardization in facilitating trade and sustainable development within the African Continental Free Trade Area (CFTA).

Forty-four African heads of state signed the CFTA on March 21, 2018 in Kigali, Rwanda, which aims to establish a continent-wide free trade area. The African leaders acknowledged that thecreation of CFTA is the greatest step since the formation of the African Union (AU). As part of the agreement, signatory state parties are expected to progressively liberalize trade in services and cooperate on all trade-related areas and on investment, intellectual property rights, and competition policy. Among its liberalizing efforts, the CFTA identified ARSO and the African Electrotechnical Standardisation Commission (AFSEC) as the lead organizations in harmonizing standards across the continent.

The agenda, photos, and presentations from the workshop are available online. For more information on the Standards Alliance and standards activities in West Africa visit standardsalliance.ansi.org.