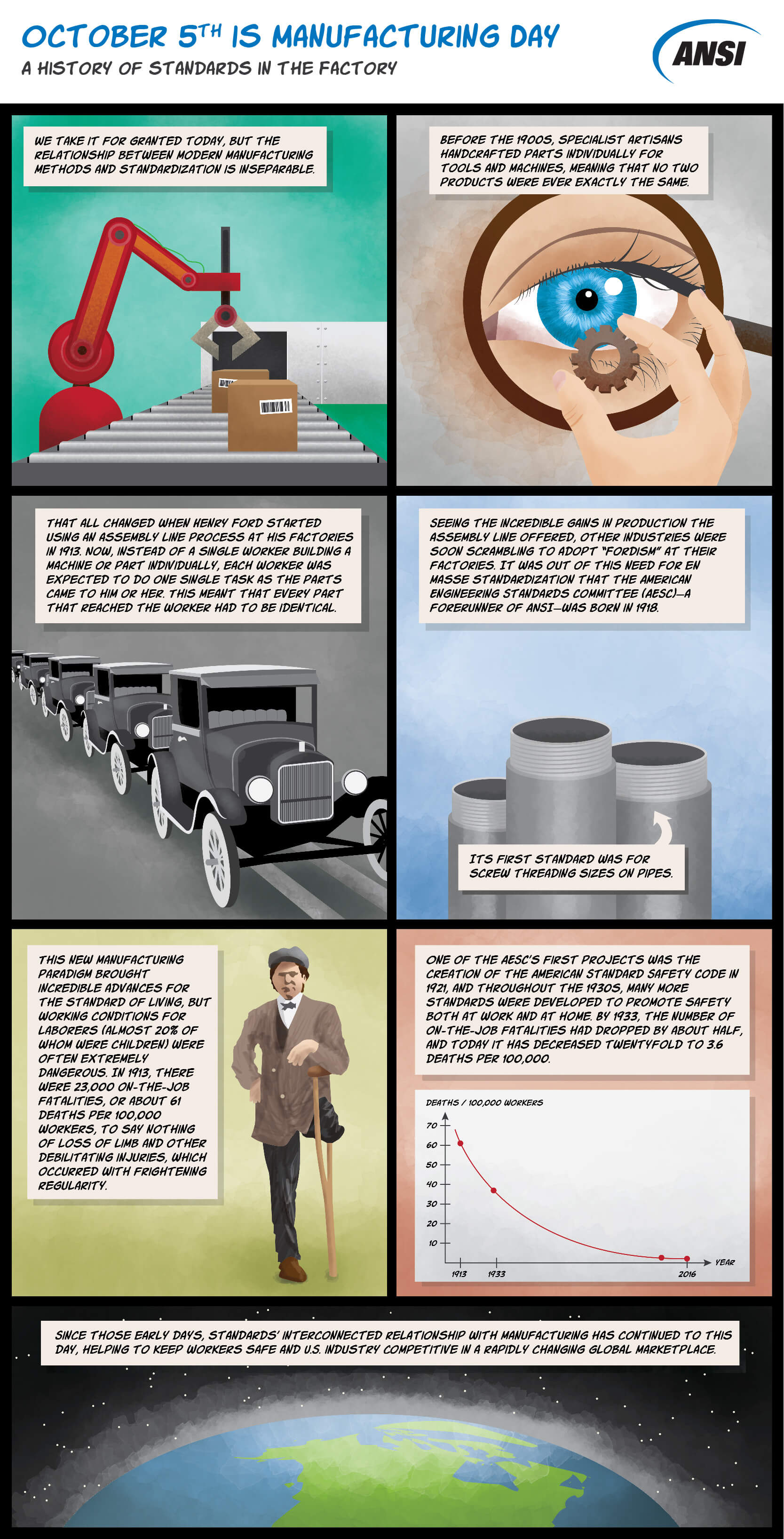 National Manufacturing Day (MFG Day) on October 5 is a time to reflect on the sector's growth through the agesfrom the industrial revolution to the recent surge of nascent technologies that include 3D printing, smart cities, and smart factories. The American National Standards Institute (ANSI)celebrating its 100th yearits members, and standards developers, and stakeholder community have continued to support the development of the sector and the success of manufacturing's growth, since the production lines of the first pipe threads and equipment for World War II.

MFG Day, produced by ANSI member the National Association of Manufacturers (NAM) and the Manufacturing Institute, takes place across the nation. This year, there are over 2,500 manufacturing events planned, and manufacturers across the coast will open their doors to factory floors to give students, educators, journalists, and others better insights on what it takes to produce, automate and build products ranging from automobiles to robotics.

How Has Standardization Influenced Manufacturing through the Ages?

During the progressive era, as the nation focused on business expansion and industrial regulations, ANSI was established under the name of the American Engineering Standards Committee (AESC). Just one year after its founding, AESC approved its first standard to impact manufacturing on pipe threads. In 1920, it went on to coordinate national safety codes that would replace laws and recommended practices that were impeding on accident prevention. However, perhaps one of the most significant contributions to the industrial industry came in 1921the year the first American Standard Safety code was approved-and covered the protection of the heads and eyes of industrial workers. It also helped support the modernization of U.S. mining, engineering, and construction industries during this time. (See a more comprehensive history of ANSI at www.ansi.org/100). Continue reading after infographic:

Two decades later, in 1941, AESC, by now renamed the American Standards Association (ASA), utilized its War Standards Procedure that it had adopted nearly a year earlierto accelerate development and approval of new and revised standards needed to increase industrial efficiency for war production. These efforts helped boost the era of manufacturing production, as nearly 1,300 engineers worked on special committees to produce American War Standards for quality control, safety, photographic supplies and equipment components for military and civilian radio, fasteners and various other products.

ANSI eventually adopted its present name in 1969, and as the next decades unlocked the development of manufacturing for aeronautics, computer parts, and most recently, the rise of smart cities and artificial intelligence, standardization remained a crucial part of ensuring valid production design and safety.

Today, standardization work influences industrial parts and structures along with processes that impact everyday lives, from major global events such as the Olympics, to good manufacturing practices for pharmaceuticals, unmanned aircraft systems, and even standards that support the production of safer, more sustainable "next generation toilets."